UPDATE (4/9/2011) : MIX Outsider has been updated to fix some “no network” issues and refine the message creation. 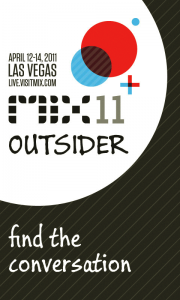 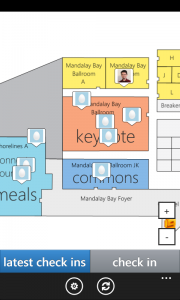 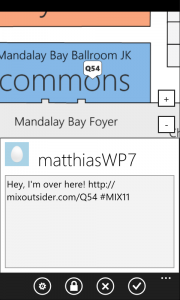 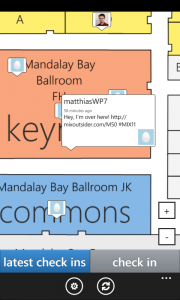 MIX11 Outsider is the MIX11 app that doesn’t care about your schedule. It cares about something more important: the people you want to talk to, meet, or otherwise hang out with at MIX. Using a map of the conference floor and a simple “battleship” mapping metaphor, you can tweet, email or text your position at the conference. Don’t eat alone in awkward silence… instead find that Twitter friend who doesn’t have a clear picture of themselves in their avatar. Don’t spend half your pre-keynote time waving your hands in the air. Just tap where you are on the map and send out a link like this one.

And a quick video of the application in action

I wish I could introduce this app with a bit more fanfare, but I’ve been waiting since Monday for my app to get through the submission process. I was hopeful that, if I got it in a week before MIX, I would make it in time for the conference. At the moment, that hope fades. As a result, until I can get the app into the Marketplace, it will be available here for download so Windows Phone 7 devs can sideload it onto their phones

(Don’t know how to sideload an app? James Ashley has a great post on sideloading to the emulator or to a device.)

The funniest thing is that the “big idea” in this app isn’t really even the app itself. The app is really just the most complete extension of the original idea.

You see, last year at MIX 10, there was a massive coordination effort among my colleagues to try and sit together during the keynote talks. This led to e-mails, text messages, phone calls, and tweets with hard to understand directions like

“We’re 12 rows from the back in the middle of the far right side as you come in (stage left).”

But my decision to do something about it came when a friend spent 10+ minutes with his lunch plate in hand trying to find our table. I thought, “This is absurd… there must be a better way to find people.”

Unfortunately, my GPS did not work very well inside the conference… which didn’t really matter since (I assume) no one wants to open up a Google Maps or Bing Maps to find people inside a building.

So Jason Alderman and I discussed the problem and thought that it might be fun to do a “Battleship” metaphor for finding people at MIX11, laying the grid on a map of the conference floor. Based on that concept, I wrote a little application that allows user to tap to see where they are and send that information out. It then collects all the messages sent out with the app and shows them on the map with the users’ twitter avatars.

Users can send public messages using Twitter or private messages via text message or e-mail. Private messages are not broadcast and cannot be seen by anyone. They contain only the helpful link to the MIX Outsider reference website (designed by the aforementioned Jason Alderman) without any identifying information.

But my biggest hope is that this application gives people a point of reference so that even people who don’t have a Windows Phone 7 device can see the tweets, reference the website and still find the people they want to meet at MIX11.