Posted on January 14, 2019 by matthiasshapiro

This is a fine short with no narrative whatsoever. It is entirely a sweet but repetitive melody set to the frolicking of a group of insects. Caterpillars turn to butterflies, insects dance and skitter across the water, etc. There was a moment toward the end when it looked like a mean-looking spider might inject some conflict into the piece. But then it ended suddenly without he anticipated conflict. 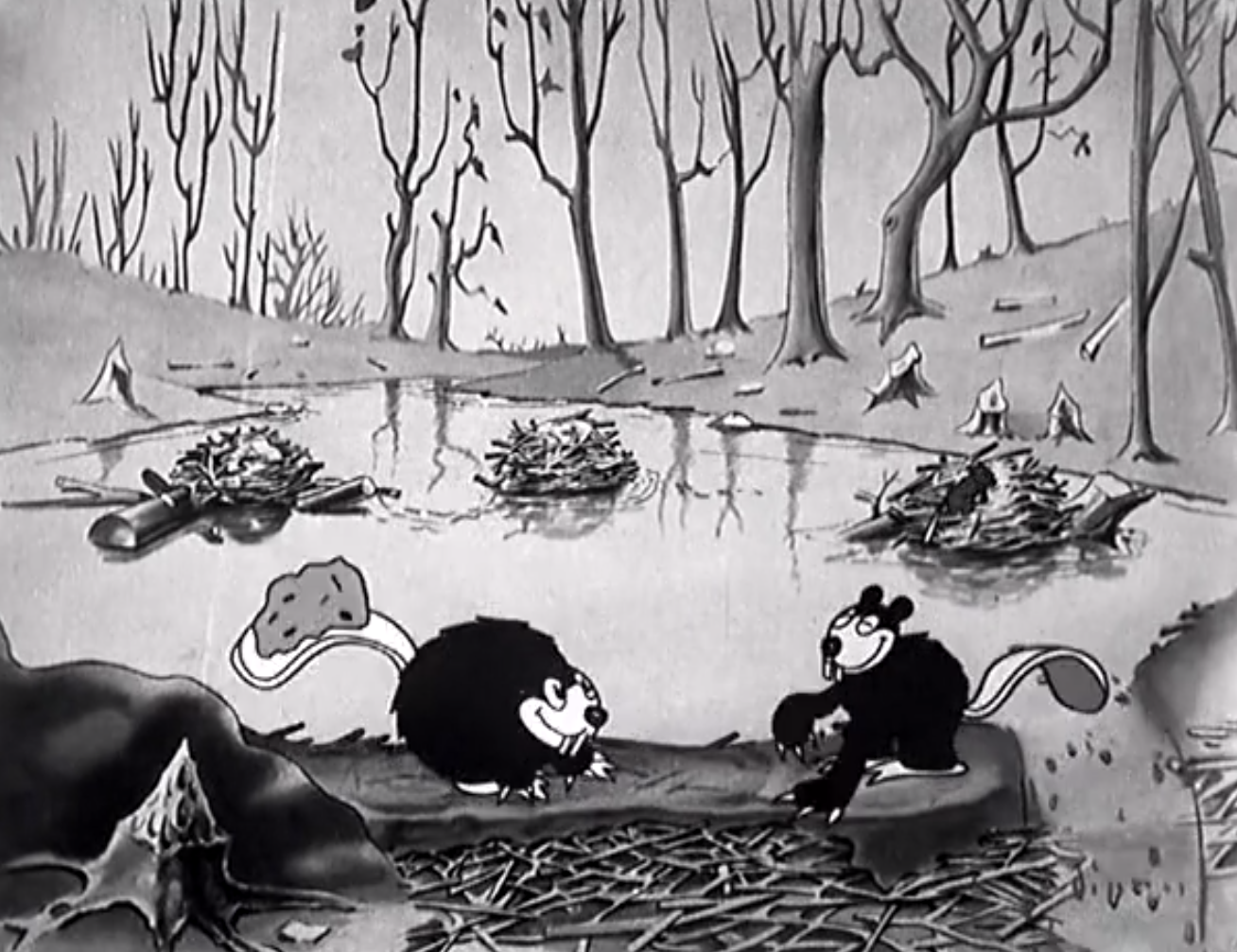 This short features squirrels adorably storing acorns and corn for the winter, crows stealing from them, beavers building a dam, and the sudden onslaught of winter driving ducks to fly south. As in “Summer”, there is no narrative to speak of, just the cuteness of the animals to drive the entire short. 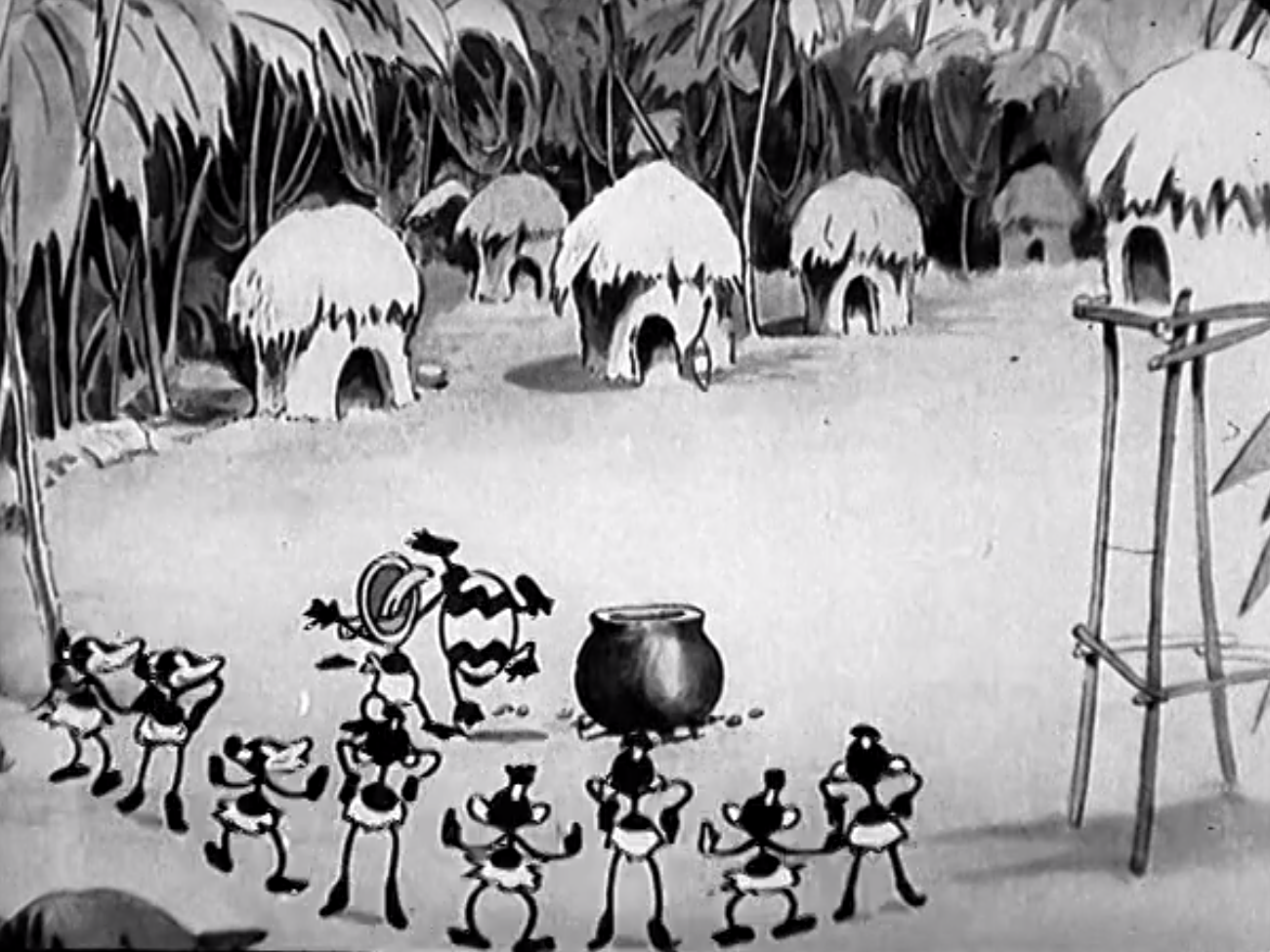 Based on the name, you kind of know going in that this short is going to be filled with problematic caricatures of native Africans. It’s actually not as bad as I expected, once you come to grips with the exaggerated features of the African villagers. And at least the short actually has something of a plot involving a villager selected for dinner, which in interrupted by a man-eating lion. The lion is thwarted in a series of melodic stunts that are… fine. Not amazing, but serviceable.

No beating around the bush with this title, the entire short is Mickey playing the violin. It speaks to Walt Disney’s obsession with putting classical music up on the screen, but things like the Sorcerer’s Apprentice play that out much better than this, which is really just not that great.

Another music-to-images piece, this one driven by the “Dichter und Bauer” (Poet and Peasant) overture by Franz von Suppe. More of the now-expected animal abuse when Mickey plays a set of suckling piglets by pulling on their tails. There is a low-culture / high-culture dichotomy in play here, which provides for most of the jokes.

Mickey and Minnie are at a beach when Minnie is carried away by the waves. Mickey saves her and she is pretty upset, so he… dances to a sailor’s tune? Ok, sure, why not!

That’s the first half of the cartoon. The second half is Mickey and a series of sea creatures singing and dancing and using various oceanic accouterments as instruments. 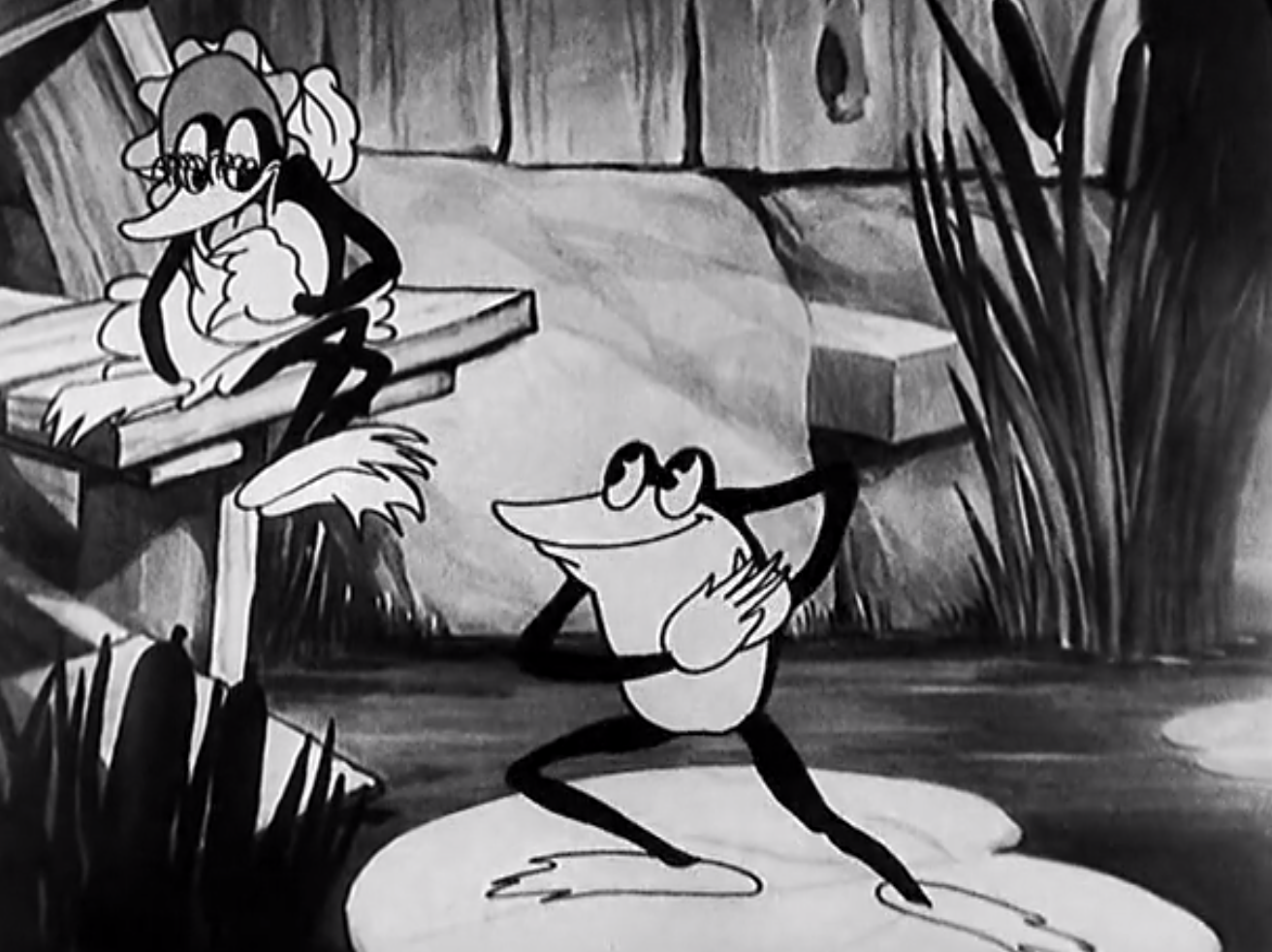 A fairly sweet little short featuring classical music (like the Moonlight Sonata) against the ongoings of creature in the night, including fireflies, owls, mosquitos, and frogs. In typical early Silly Symphony manner, these shorts have no narrative to speak of, relying on a more abstract attraction of music and rhythm.
There is a minor story of amphibian love toward the end, but is so straightforward and without conflict that it hardly counts.

May 8, 1930 available in More Silly Symphonies 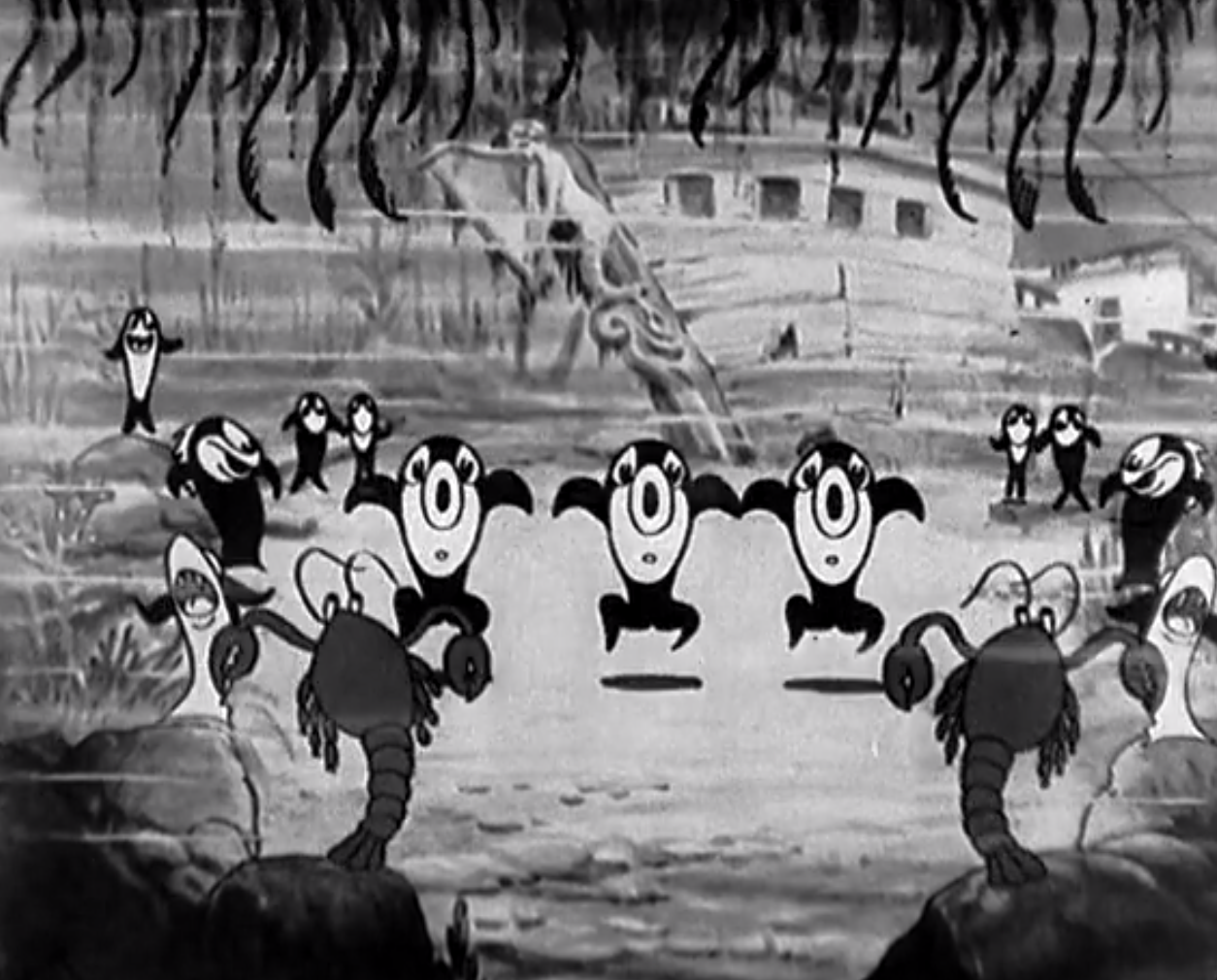 In some ways, this is more of the same (animals dancing to music) but there are some really interesting effects that elevate this. The bubbles and the water wave effects are particularly of note. I speak from some ignorance, but it seems like these are relatively new effects that we haven’t seen employed in animated pieces before.
I enjoyed the octopus of ill intent. Delightfully evil. I demand a spin-off series.

Mickey saunters into a cantina where Minnie is working. He ticks Minnie off with his over-familiar nature whereupon we kick into the musical number. We do get a little story toward the middle, when the villian  (and early permutation of Pete perhaps?) dances into the cantina and steals Minnie away.

This is one of the better ones so far. I get the feeling that Disney is working his way toward integrating story, narrative, and the musical numbers. Not quite there yet, but getting closer. 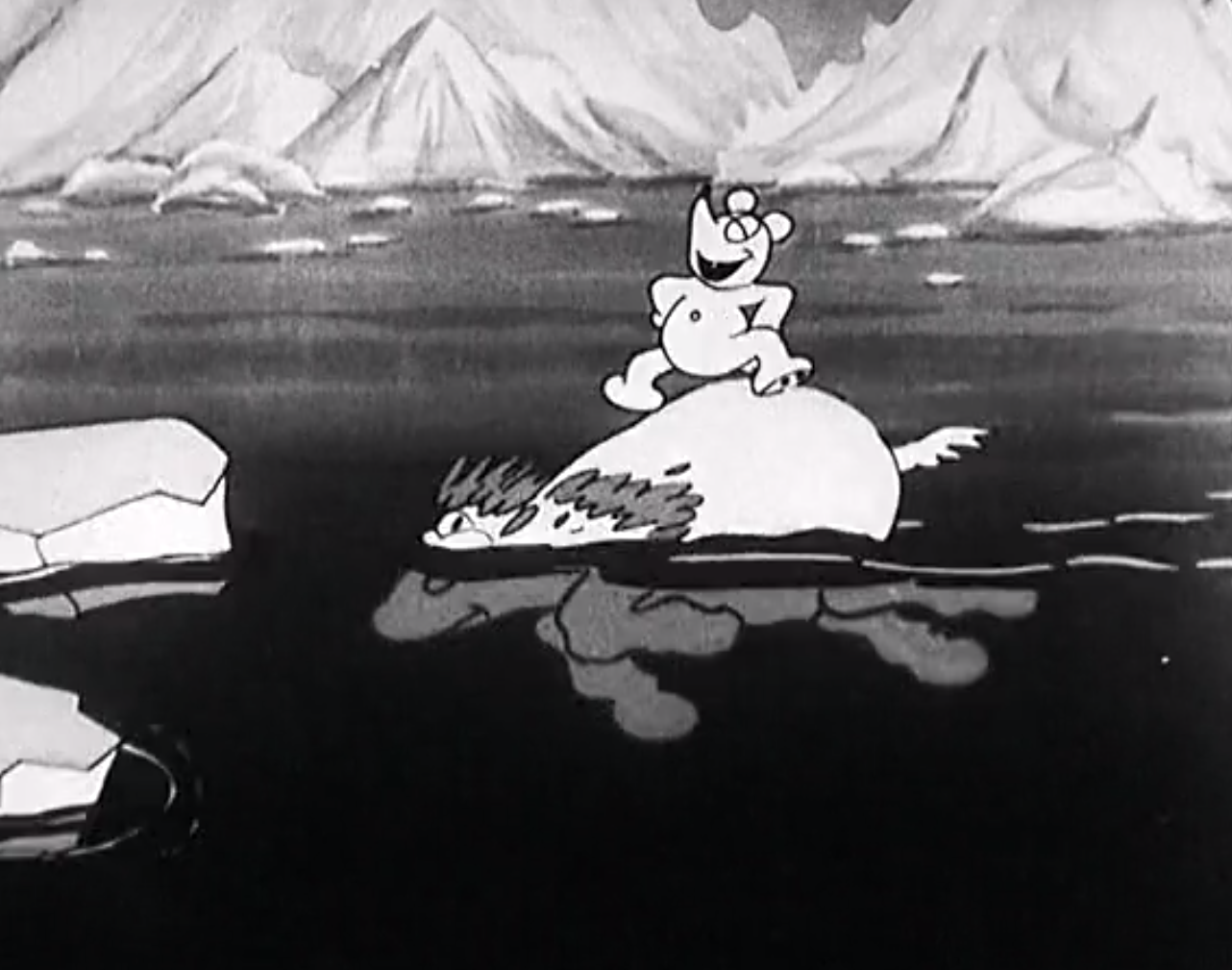 More adorable animal character, this time of an arctic quality. Polar bears, seals, walrus, penguins (technically Antarctic), and fish populate this very rhythmic piece. Still no narrative, but it clips along at a decent pace so it’s never boring.
This features some new water effects. Ripples and under water visuals seem to make a fresh appearance.

Midnight in a Toy Shop 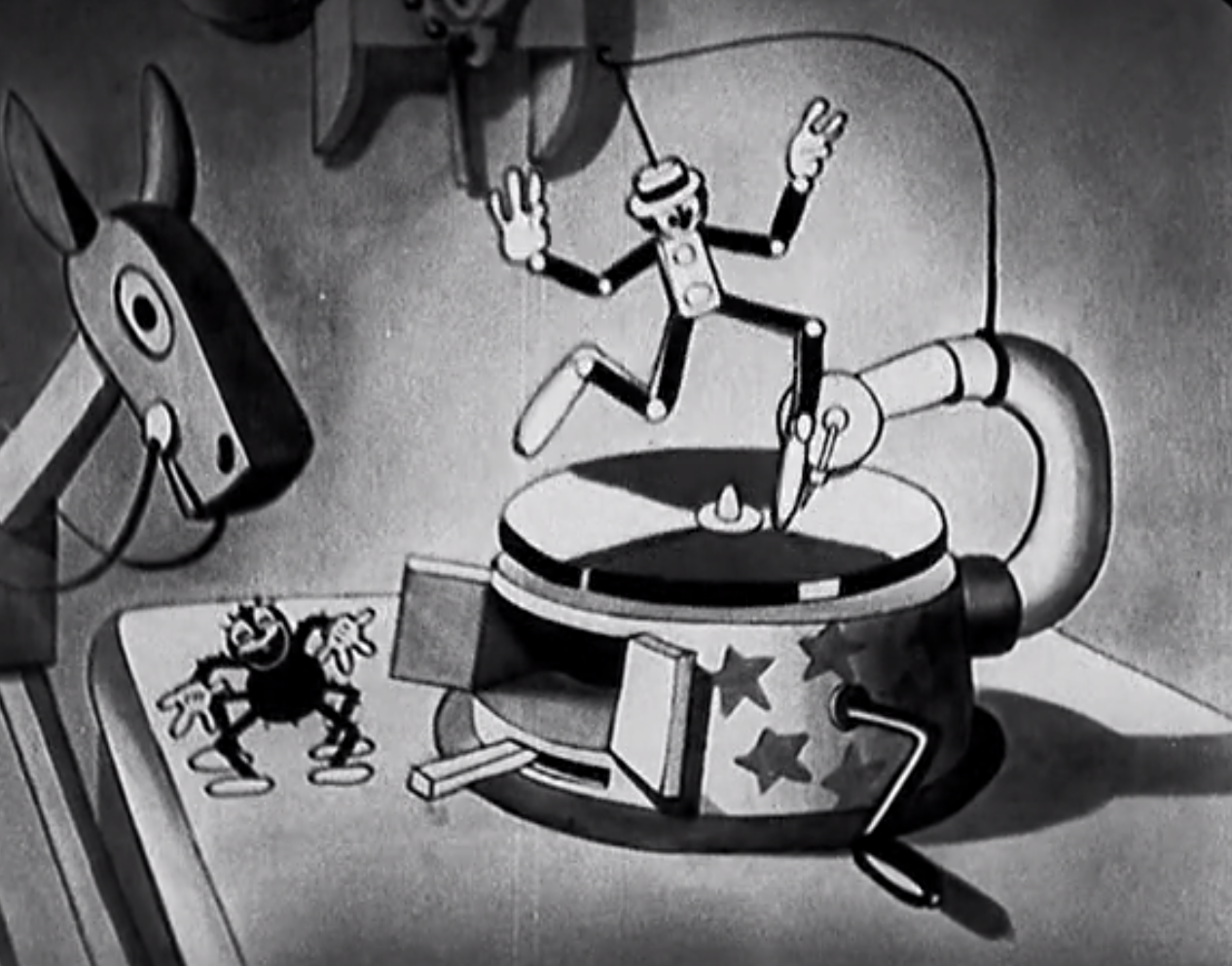 This delightful piece has an adorable spider character find his way into a toy shop. He then takes turns playing with and being terrorized by the various toys in the workshop. It’s still extremely music driven, but at least it has the pretense of a narrative baked into it. That helps drive the concept in a more cohesive manner

July 25, 1930 – available on the Mickey Mouse in Black and White Disney Treasures DVD

Mickey is the fire chief of a station when the alarm goes off and the team races off to put out the fire. They mostly suck at it, but there are plenty of good jokes in it. Definitely nice to see them focus more on the jokes and the story. There’s a humor trajectory and it’s trending in the right direction.

Mickey and Minnie perform for a community gathering. Here we actually get to see Horace Horsecollar and Clarabell Cow interacting, which is neat. Outside of that, it’s another song-and-dance-and-Mickey-uses-inappropriate-things-as-musical-instruments piece.

Seriously, what is wrong with this mouse? He uses Minnie’s tail and underwear for musical accompaniment, Mickey is kind of a jerk.

September 25, 1930 – available on the Mickey Mouse in Black and White Disney Treasures DVD

Mickey is part of a prison chain gang! It is not made clear why Mickey is in jail (possibly for animal cruelty) nor why he is not dressed in stripes as the other inmates. This starts off promisingly with some decent prison labor gags, but sadly ends up shifting back into the instruments and dance routine. There’s a prison break at the end which adds some drama, but it still feels like a lost opportunity. 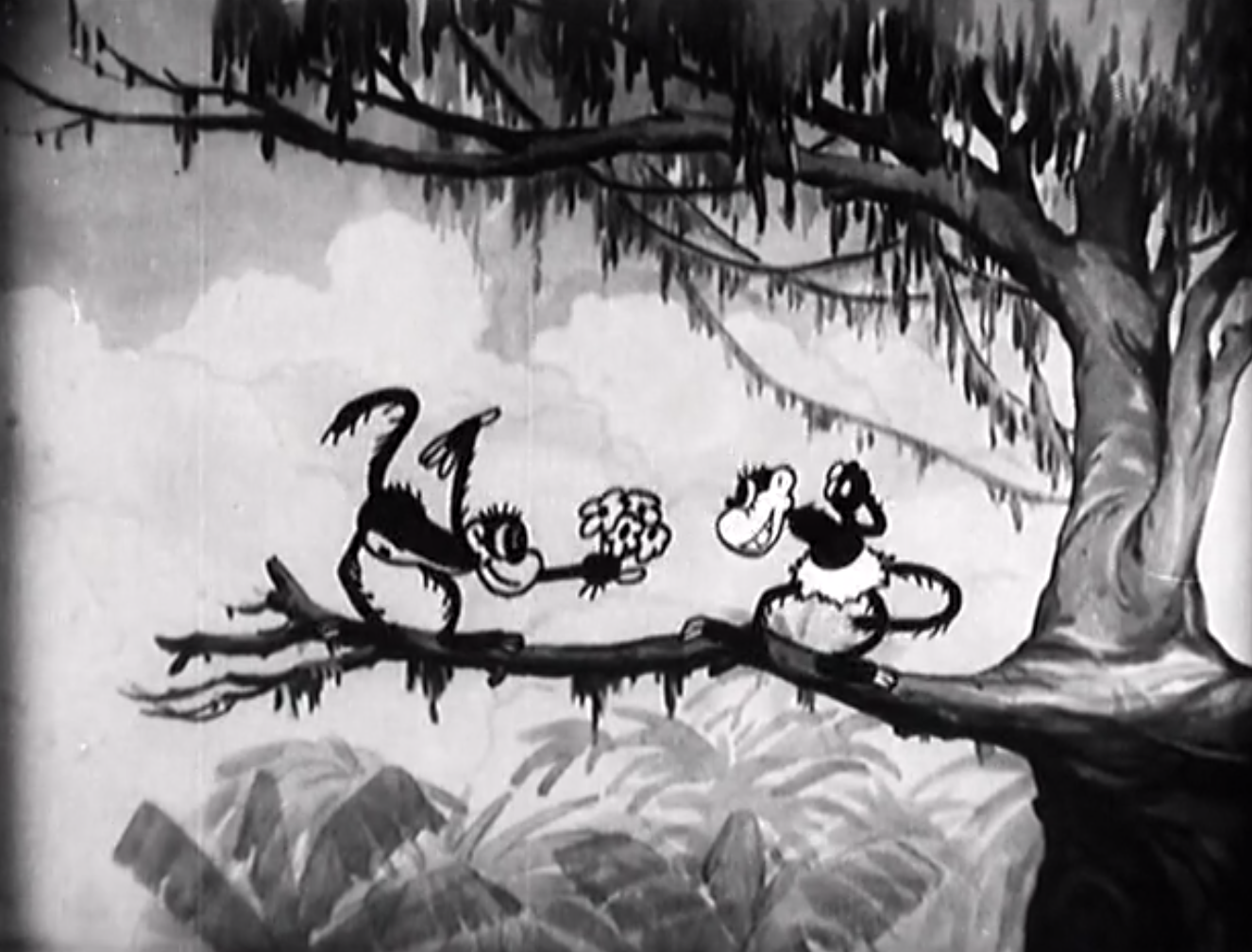 The core of this cartoon is that it is a Mickey Mouse cartoon with monkeys. There is the male monkey (Mickey) wooing the female monkey (Minnie) who alternately is smitten by him and doesn’t take his bullshit.
It also has dancing alligators, snakes, and hippos, but at the core it is a sweet cartoon about monkey love.

October 10, 1930 – available on the Mickey Mouse in Black and White Disney Treasures DVD

Mickey reads about an escaped gorilla and calls to warn Minnie who…. plays a song to him about how she is all alone? And this makes him feel better?

Until the gorilla grabs Minnie. Then it’s Mickey to the rescue! Decent plot, some good gags. Overall well done.

It’s interesting to me that there are several animation techniques in this that play with directional light and shadows. I’m not sure that was a common technique at the time. I know Walt Disney liked to explore ways to push the technical possibilities of animation so this seems like maybe it was one of those “let’s try this out and see if it works” shorts.

This is Pluto’s first short, and boy does he look mangy! (I looked it up and technically Disney claims Pluto was in Chain Gang, but I can tell you that is nonsense. The dog that is supposed to be Pluto looks nothing like him.)

Mickey and Minnie on a picnic and, instead of eating their food, they dance in the meadow. The animals steal their food and, quite frankly, they deserve it. There are some fun visuals of the animals (especially the insects), but that’s about it. 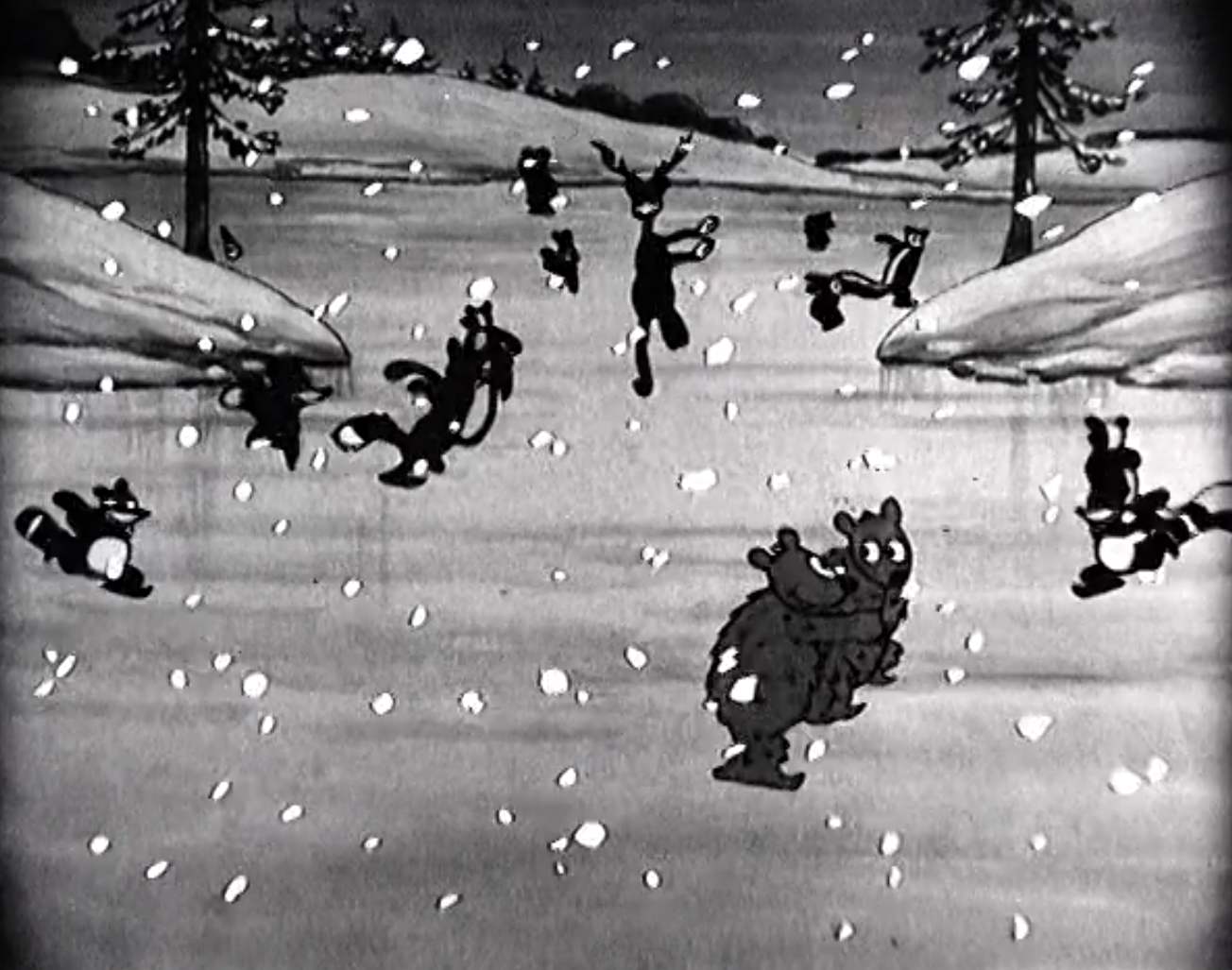 Sleeping bears, dancing trees, skating reindeer, sledding squirrels and racoons populate this energetic cartoon. Not so much of a narrative, which falls in line with what we would expect from these naturalistic seasonal thematic pieces .follo
Special effects include falling snow and ice effects. This is new, but not overly impressive.

December 5, 1930 – available on the Mickey Mouse in Black and White Disney Treasures DVD

Mickey and Minnie lead a wagon train which comes under attack by Indians. Leaving aside the 1930’s portrayal of Native Americans (which is set pretty solidly in the stereotypes of the time), this one was better than most. Solid pacing, good gags, decent drama.

This buoyant piece employs many of the water effects we’ve seen in previous silly symphonies this year. It also plays with anthropomorphizing plants, flowers, insects, clouds, trees, and fire.
The main narrative is around a lightning fire. The fire devastates the forest until Pan is summoned and tames the fire and leads it (as a pied piper) to its doom in the lake.
This is lovely little film, with just enough good gags and fun bits to bring us through the main story.

This entry was posted in Disney Shorts. Bookmark the permalink.